Top 10 most expensive super yachts in the world!

Top 10 most expensive super yachts in the world!

Luxury crewed yacht charters on the largest and most expensive super yachts are not often advertised or indeed available, yet for those special family or business moments, we can arrange some of them for super yacht charters in any location worldwide.  The prices start from around 95,000 Eur / day plus APA Expenses and such offers are only provided on special occasions.  The yachts listed below are not or may not be part of that offer. 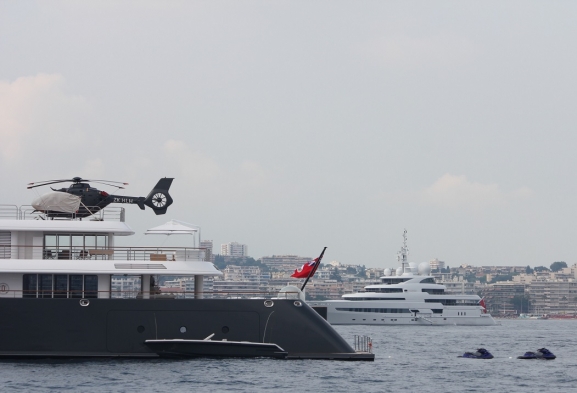 The top 10 list of most expensive super yachts is as follows *:

Number 10:
SEVEN SEAS may not be the best known  or most expensive yacht, yet she is one of the most exclusive mega yachts in the world. Reported to have cost around 200 million US$'s to built, her owner, the movie director superstar Steven Spielberg commissioned her with a 15' infinity pool whose glass surface can double up as a movie screen, a fuly equiped gym, obligatory helipad, private deck for himself and his partner and room for up to 26 crew members who cater for only a maximum of 12 guests on board.

Number 9:
LADY MOURA is second on the current list of most expensive super yachts in the world. At a reported 210 mil US$'s she is only a fraction more expensive than the aforementioned, Oceanco built, SEVEN SEAS. Built for the Saudi owner Nasser Al-Rashid, she is not the most impressive giga yacht externally, yet what she does not have on show, she has in the interior.  Probably one of the most exclusive yachts in the interiors, she features a number of gold plated escutcheons inside and on top a genuine private resort which slides out of the interior.

Number 8:
Reported to have cost around 330 million US$'s to build, SERENE is a 439' / 139m giga yacht with huge dimensions and probably most advanced features by any of the superyachts in this list. Built by a superb Fincantieri shipyard of Italy, this Espen Oeino designed 7-deck giga yacht is in fact regularly offered for charter with daily prices in the region of around several hundreds of thousands Euros!!  She sleeps up to 24 charter guests in supreme luxury within a total of 12 staterooms which include a sumptous master suite, 1 VIP guest room and 7 double cabins.  With a total of 52 crew members, all guests are guaranteed a relaxed luxury yacht charter experience during their family cruise or business holiday. 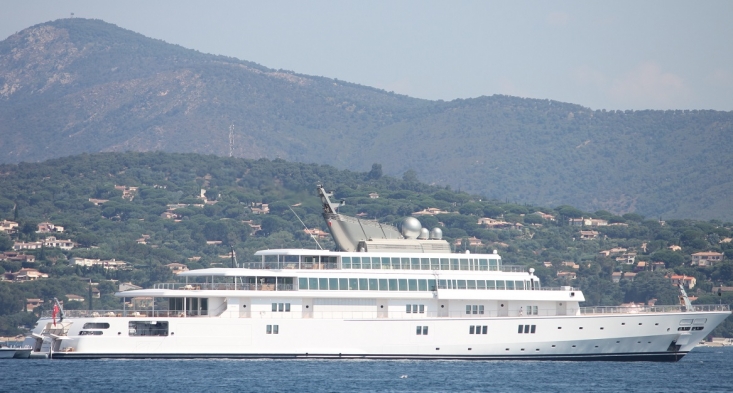 Number 7:
DILBAR, reportedly named after the Arsenals co-owner Alisher Usmanov's mother, can accommodate up to 20 guests and up to super yacht crew members. Built by privately owned, German shipyard LUERSSEN, this fully customised, full dispacement giga yacht has a steel hull and aluminium superstructure with an astonishing 16m / 52' beam.  Designed by the famous Tim Heywood and with an interior by Alberto Pinto, the 110m Dilbar was built in 2008 for a sum of around 300 mil US$'s.

Number 6:
Super yacht ''A'', an almost unbelivable and unique 323' / 190m vessel, was reported to have cost 300 mill US$'s to build.  Ordered and owned by a Russian billionaire Andrei Melnichenko, she is a stunning yacht with never before seen superstructure. Having caused quite a stir at her launch, she remains one of the most exclusive super yachts of today, as the accommodation for only 14 guests is indeed a 7* de-luxe arrangement, especially if we have in mind that up to 40+ super yacht crew members provide service 24hrs a day to all guests on

Number 5:
DUBAI, a 162m / 530' giga yacht of immense power and luxury, was most likely paid to the tune of around 350million US$'s before she was delivered to her owner.  Originally commissioned by the prince of Brunei back in 1996, the project was taken over by Sheik Mohammed bin Rashid Al Maktoum, the prime minister of the United Arab Emirates in 2001.  As all yachts on this list, she was dubbed the floating city given the immense facilities found on board such as the helipad,

Number 4:
RISING SUN is one of the more traditional super yachts in this list.  At first sight, she is a classic and as such likely not to be the most popular amongst potential yacht charter clients should she ever be offered for charters.  She does look impressive in her interiors nevertheless and when set aside most other giga yachts, with her impressive 138m or 452' it is indeed clear that she is one of the greatest super yachts in this world. As such, costing her owner between 200 - 380 million US$'s prior to the delivery, she is one of the most expensive ones indeed.  Dubbed the floating palace as she features a basketball court which converts to a helipad, she was initially commissioned by the Oracle's CEO Larry Ellison, The RISING SUN is now owned by the moview mogul David Geffen.  With one of the fastest cruising speed amongst all of giga yachts, this five deck vessel is indeed a special boat worth mentioning in any list. 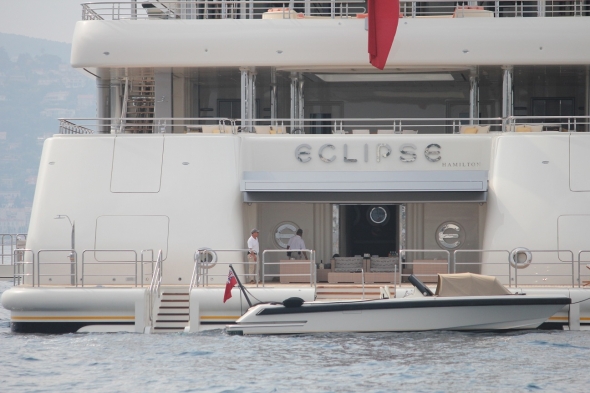 Number 3:
From here, the difference seems to double up again.  Even though all previous mega yachts on here are not for anyone else other then the billionaires, the top 4 giga yachts seem to be for multi-billionaires only.  At 480'+ / 147m, the TOPAZ super yacht is not only simply stunning from all angles, but also enormously expensive with a reported price tag of well over 600,000,000.00 US$'s. Yes, that is 600 million!

Number 2:
AZZAM.  One single world says it all.  Despite her huge 180m / 590' superstructure, this LUERSSEN built gaiga yacht is as streamlined as a fighter jet and as fast as a power boat.  She cruises at well above 30kn and with a price tag of 650 million US$'s AZZAM is one of the most expensive super yachts in the world.  As the largest mega yacht in the world, AZZAM's production was managed by a world-class team led by the Engineer Mubarak Saad al Ahbabi.  With a record built time, sublime technology and design, interior design by Christophe Leoni and prestigious Nauta exterior design, AZZAM is in many ways the milestone which is unlikely to be reached any time soon.

Number 1:
Abramovitch's ECLIPSE, a 550' / 163m giga yacht is considerably smaller than the AZZAM, yet for some reason she is reported to have had a higher price tag. Some assume it is because of her special commissioning, making her not only self-sufficent, but also the safest yacht in the world, with bullet proof tenders, intruder detecting system, anti-paparazzi laser shield which scans and blocks nearby camera lenses, submarine capable of submerging up to 50m and most advanced surveillance technology on board which aparently includes self-defence rocket launchers as well.   Built by German shipyard Blohm  + Voss and with interior design by the famous Terence Disdale Design studio, super yacht ECLIPSE has a crew of up to 70 at any time with maximum 24 guest rooms, 2 helipads, 2 swmming pools, a disco hall, numerous tenders and afore mentioned defense techonology.  At a price tag of between 800 mill up to a cool 1.5 billion US$'s, no wonder she has everything a human being requires to survive the harshest of winters, hurricanes, army attacks or indeed a tsunami.

* The list was published in October 2014 and will be occasionaly reviewed to account for any changes or reported updates.

Family SAN PEDRO chartered a luxury SY PERSEUS, 150' Perini Navi and were ''extremely satisfied'' with both yacht and the crew, as well as perfect booking procedure and service by our charter agents.

All rights reserved by SuperSailYachts.com © 2013

Your request has been sent!