Report on rise in popularity of superyacht ownership!
News

Report on rise in popularity of superyacht ownership!

Portal boatshop24.com recently provided a detailed list of 15 largest and most expensive super yachts in existence today, with estimated costs and their owners’ wealth clearly showing a huge rise in number of super yacht sales and total US$'s amounts spent on purchase of these floating palaces …

The first three graphs below are showing the richest individuals and their most expensive assets. Roman Abramovich’s giga yacht ECLIPSE is clearly the most expensive one, with estimated cost of around 1.1 billion US$’s.  Mr Abramovich, the owner of Chelsea Football Club, is clearly spending more than anyone else on his luxuries and safety on board, even though he himself does not have as much wealth as the owner of the next most expensive yacht, the AZZAM, both of which are built by prestigious German shipyard Luerssen. The AZZAM’s owner, Khalifa bin Zayed al Nahyan who is the Emir of Abu Dhabi and the commander of the largest army in the Middle East, spent 600 million US$’s on his boat.  Super yacht TOPAZ, owned by Mansour bin Zayed al Nahyan, the deputy Prime Minister of United Arab Emirates, is the third in the list, with a reported cost of well over 500 million US$’s.  David Geffen, who is not shown on these graphs owns two super yachts,  PELORUS (300 mill) and THE RISING SUN (200 mill) both of which cost him the same amount, namely 500 million US$’s. 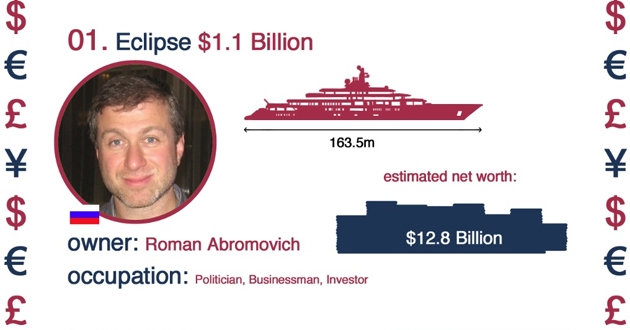 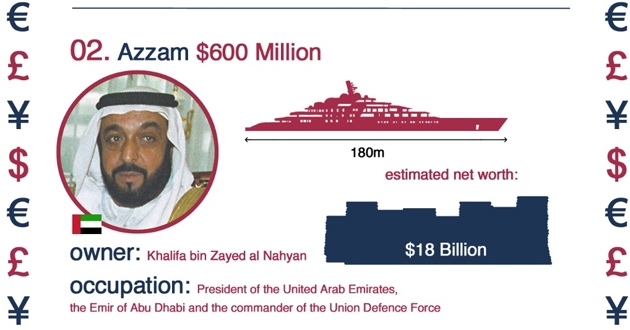 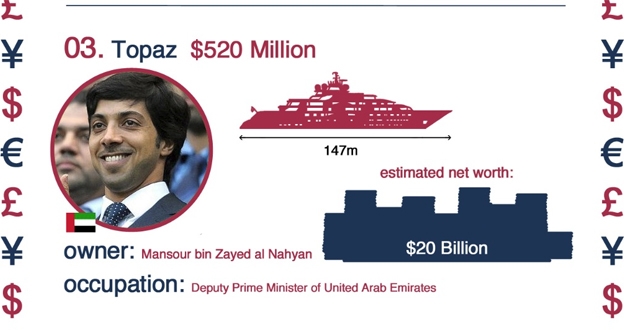 The next graph is showing the price of all most expensive super yachts in the world and the total wealth of their respective owners.  It is clear to see that some owners spent a greater proportion of their wealth on floating palaces than others.  In comparison to Roman Abramovich, Paul Allen, the co-founder of Microsoft, spent only 200 million US$’s on his giga yacht OCTOPUS, even though his wealth is almost double that of Chelsea FC owner. 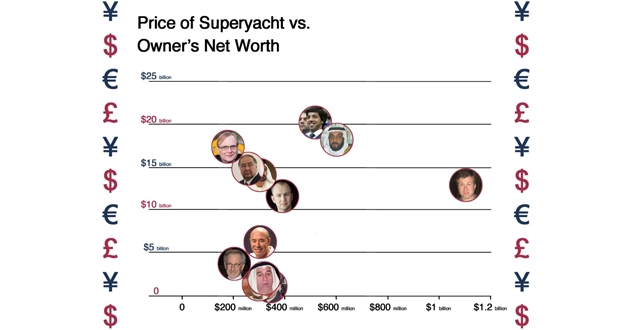 The next graph below is showing the huge rise in super yacht sales since 2009.  This is projected against the doubling of the number of dollar billionaires which occurred at the same time.  While in 2009 there were around 700 billionaires in the world, by the end of 2014 there were more than 1,600 with number of super yachts more than doubling from 200 – well over 400 during the last five years. 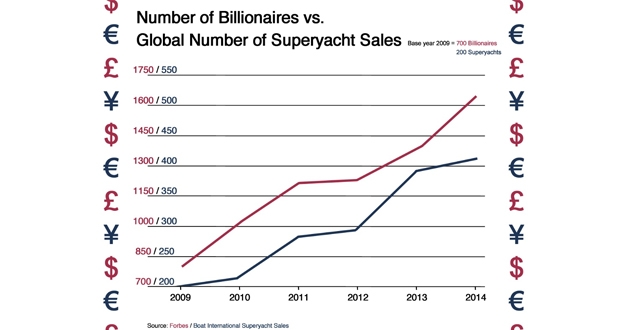 Final two graphs are showing the total spent on purchasing super yachts hitting close to 4 billion US$’s in the last year alone and that richest 1% in the world now control close to 50% of the total wealth, clearly corresponding to the rise in super yacht sales. 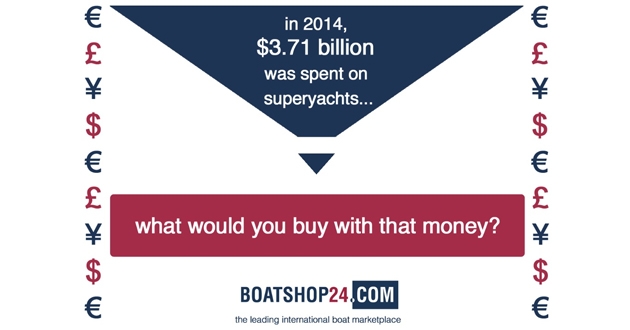 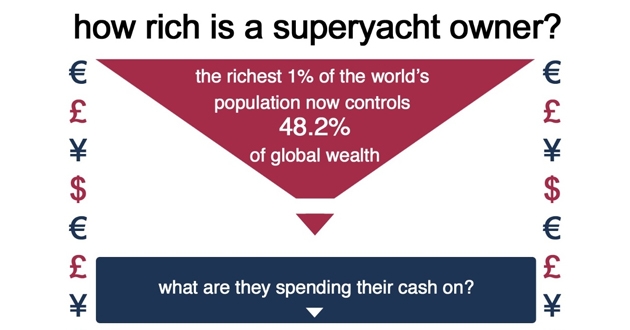 Some of these super yachts may be available for luxury crewed super yacht charter cruises or could be offered for sale.  In case you are interested in chartering one of these or similar yachts or wish to consider purchasing one of the models which are offered for sale, do let us know by filling out the CHARTER REQUEST FORM or send us an email to charter@supersailyachts.com now.

Disclaimer:  The information provided here are made as a general guide only, made to give a broad description and latest news of the shown yacht or yachts. They are not intended to constitute part of an offer or contract. The details of the luxury yacht or yachts displayed on this page are made merely for informational purposes, and the yacht or the yachts are not necessarily available for yacht charter or for sale, nor is she or they represented or marketed in anyway by SuperSailYachts.com. All details, including any photographs, measurements, plans and specifications mentioned, are given as a guide only and should not be relied upon for the purchase or charter of this yacht. The copyright of all details, photographs and deckplans remains the property of their rightful owners or their chosen representatives.

This news refers to:

While the crowds bask in the hot Mediterranean Sun, some yachting enthusiasts may prefer exploring rocky beaches of around 3000 islands lying offshore in New England’s state of Maine.  Picture-perfect towns, historic lighthouses and secluded coves …

Transatlantic crossing with a supercat 70ft Sunreef catamaran this November!

Keen on the ultimate yachting adventure and once in a lifetime experience? We are pleased to recommend a NEW 2022 model fo SUNREEF 70 ready for the transatlantic crossing.  With a top captain, full gear and all inclusive service, you can cross the Atlantic in luxury …

Italian lifestyle at its best with Southern Wind 82 supersailyacht!

One of the best ways to enjoy Italian LA DOLCE VITA lifestyle is to charter a luxury sailing yacht such as S/Y AMMONITE with your family in Italy and plan to explore lovely architecture, eat best local cibo or food and to experience Italian culture, music and history …

Looking to charter best Lagoon Seventy 7 there is? Look no further!

The most luxurious of all Lagoon 77’s is cruising around West Mediterranean this summer. She will also be heading to Indian Ocean and towards Seychelles for winter 2022/23 season. MANE ET NOCTE is the perfect example of a super catamaran offered for private yacht charters …

Superyacht charter on BENETTI VISION 145 with 20% discount in Greece!

Swiss party of 4 gentleman chartered a luxury sailing catamaran LADY ALLIAURA in the Caribbean and had absolutely amazing experience. This lovely 70' cat was just perfect for their requirements and the  super yacht crew on board made all the difference too. The Caribbean islands of BVI's proved to a perfect location for this private yacht charter getaway too. They are keen to get back on the water again; since returning back home they can't wait to be sailing once again.

”
All rights reserved by SuperSailYachts.com © 2013

Your request has been sent!